This article says that the US has put in a new rule that air travellers must be fully vaccinated before getting on a plane to the US. (Confirmed at this US CDC page.)

This paper from Ontario (from August) found that parents, in addition to everything else they were dealing with, had a harder time packing lunches for their kids. Kids frequently were given less time to eat and/or the location was changed, and kids sometimes faced loss of access to microwaves, garbage cans (!!!), and help from teachers (e.g. opening lids). Yow.

This preprint from the USA found that antibodies to common cold coronaviruses didn’t do much against SARS-CoV-2. (They had some effect, but not enough.)

Risks of hair loss, chest pain, cough, muscle aches, and respiratory disorders were only significantly higher during the early period. People who were vaccinated before catching COVID-19 had a lower risk for trouble breathing, but similar risk for other symptoms.

Interestingly, they also found that post-infection kids had more strep and pinkeye than controls.

This paper from Portugal found that 52% of their subjects (~100 people who had been infected with COVID a year earlier) scored poorly in at least one of: a brief visual memory test, the California verbal learning test, and the Symbol Digit Modalities test. 18% scored below threshold in two or more tests.

Good news! This paper says that people treated with platelet-rich plasma from their own blood are 12.5x times more likely to recover their sense of smell after COVID-induced loss than controls.

This paper from Manitoba found that bathing cells in DHA, an omega-3 fatty acid found in fish oil, prevented SARS-CoV-2 from getting into cells. They think DHA reduces the number of ACE2 receptors. (Don’t get too excited yet: there’s a big difference between bathing cells in petrie dishes with DHA and humans ingesting DHA. I also sort of think that you want ACE2 receptors in your body, they sound kind of important.)

This paper from Spain says that one or two doses of an experimental vaccine gave 100% protection against COVID-19 getting into the brains of hamsters. The vaccine uses a modified Ankara virus (the same (non-infectious) virus used in smallpox and monkeypox vaccines) which has the SARS-CoV-2 spike bolted on.

The live virus assay papers say that there’s more improvement than the pseudovirus papers. Note that live viruses give more meaningful/accurate data than pseudoviruses. (Pseudoviruses are easier (safer) to work with because they are not biohazards.)

This preprint from Israel compares the bivalent booster to no booster:

This paper from Sweden found that mucousal IgA levels were high enough to be protective in most people after a BA.1 or BA.2 infection, even after eight months. BA.1 and BA.2 infections were strongly protective against BA.5 infections. 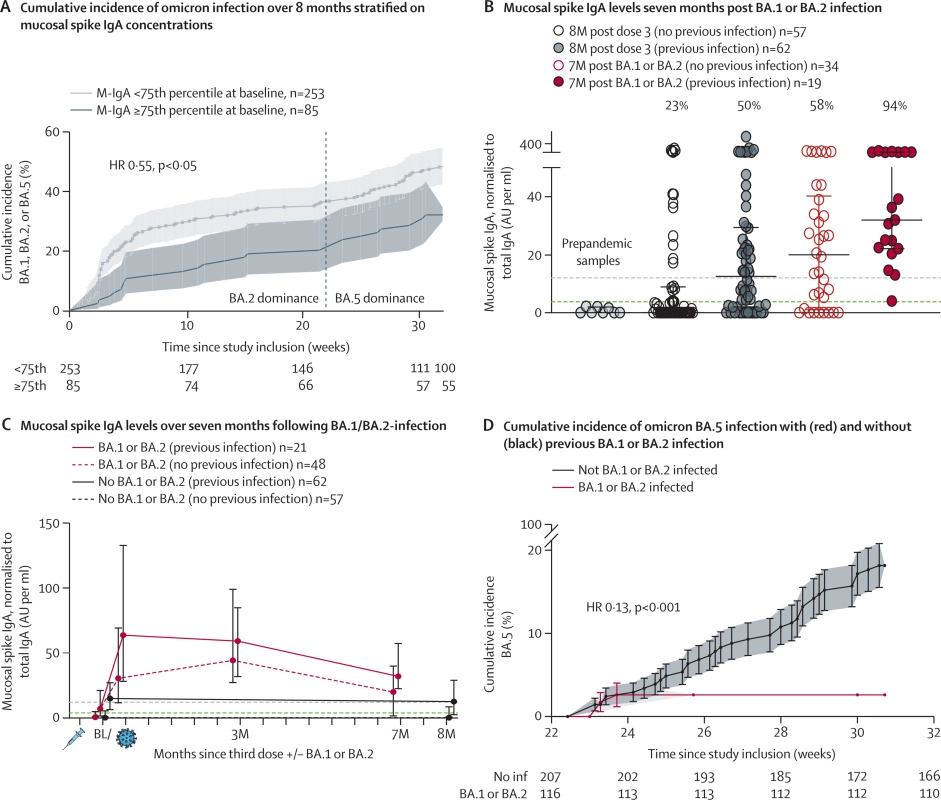 This is good news: if mucosal vaccines can provoke mucosal IgA, then maybe we can get vaccines which last longer!

This press release from CureVac company says that they got good results from their mRNA vaccine with a modified spike protein, better than with their unmodified spike. (As this article says, CureVac really resisted modifying the spike backbone, which other vax makers had done. (I think the modification they are talking about is the two-proline modification, but I can’t tell from the documents I could find easily.))

This paper from the USA hints at link between Long COVID and demyelinization (which also happens in Multiple Sclerosis), pointing out that there are SARS-CoV-2 nucleocapsid proteins which look an awful lot like some human proteins that the immune system is believed to attack in MS.

This article says that PHAC is making commemorative coins to give all PHAC workers at a cost of $16 apiece. The article seems to be positioning it as a LOOK AT WASTE IN GOVERNMENT!!! while I’m going uh, yeah, $16 is a pittance.

I have a vague feeling that maybe I recommended this long read on six pandemics which were averted, and how. Still, it’s really good.