This paper says that there is a blood-olfactory barrier (similar to the blood-brain barrier) and that blood-borne antibodies can’t get to the olfactory epithelium (mucous membrane lining). (Note that SARS-CoV-2 can get to the brain via the olfactory bulb. !!) That suggests that we are never going to get to sterilizing immunity (i.e. you never get sick ever again and can’t transmit after a vax, like with measles) until we have mucosal vaccines.

The virus can cross the barrier, but antibodies can’t, it appears. One experiment they did was infect one mouse via an injection with a virus called VSV-Ind, then let it recover. (Mice are immune after getting over VSV-Ind.) After that, they — caution, this is weird and gross — they sewed the two mice together in such a way that the two mice were sharing a circulatory system. (Yeah, this happens. I’ve seen discussion of this procedure before.) They then infected both mice nasally with VSV-Ind. The mouse which had recovered did not get sick, but the mouse which was “naive” did, even though they shared blood. This means that whatever was protecting the immune mouse was not in the bloodstream.

Now, I am having a little trouble understanding how the mRNA vaxes could generate antibodies which do not reach the olfactory mucosa but still give 95% effectiveness against infection. The paper is very dense and technical and I had to give up partway through. One possibility is that they measured infection with nasal PCR tests, and those didn’t accurately measure infection in the olfactory mucosa. (I think the olfactory mucosa is way way deep in the nose.) You would think, however, that olfactory infections would give rise to loss of smell, and Pfizer/Moderna would have noticed that. Another possibility is that SARS-CoV-2 acts differently than the viruses they used in the paper. I have no answers for you.

Update: I will talk about this more next week.

Last week, I mentioned this paper about the Moderna BA.1 results in test tubes using blood from mice. This paper from Moderna with results in test tubes with blood from humans says basically the same thing: it does better against Omicron than shots made with COVID Classic spike proteins. (mRNA-1273 is the COVID Classic shot; mRNA-1273.214 is the bivalent BA.1 booster.) 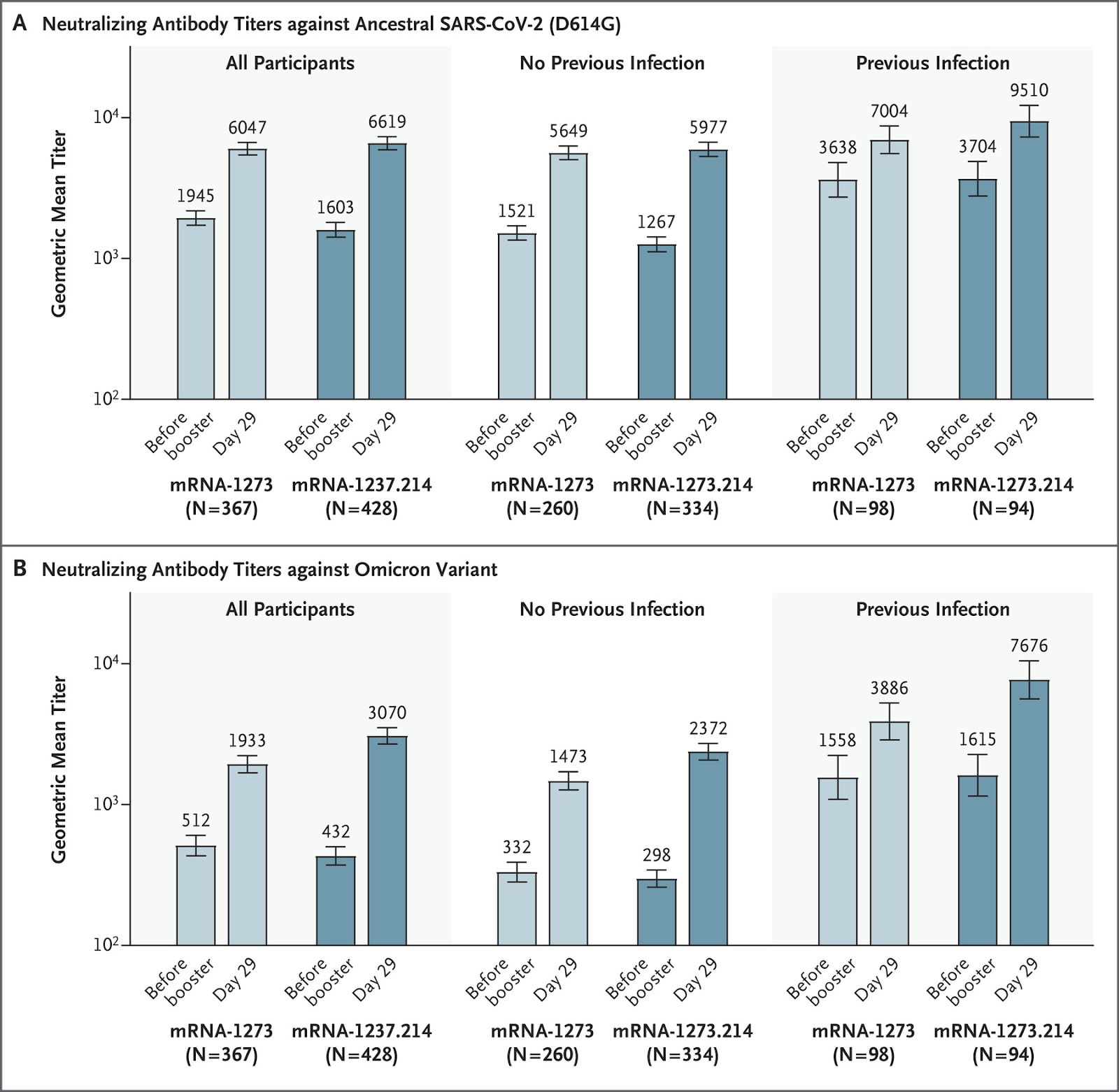 This preprint from BNT (the “Pfizer vax” people) says that their BA.1 and BA.4/5 vaccines generate antibody levels which are better against Omicron than their original (BNT162b2), no big surprise. None of them work as well against BA.4/5 as the original vax did against COVID Classic, alas. (The data is from mouse and human blood in test tubes.)

I have talked about how Novavax seems to give broader protection than the mRNAs, and said that I had seen people saying that because Novavax stabilized the furin cleavage site, it did a better job of presenting the S2 part of the spike protein to the immune system. The S2 part has fewer mutations in it.

Well, I could say that, but I didn’t understand it. This Twitter thread (from February) gives a bit more explanation. It says that Novavax disables the furin cleavage site so that the spike does not get cleaved, and the furin cleavage spike is exactly at the S1-S2 junction. (This makes me wonder where the S2 piece goes… does it get eaten by the cell and never presented to the immune system? As a little piece not attached to something which looks like a virus, does the immune system just treat it like junk not worth paying attention to?)

This paper from the USA found, in a very large study (of veterans, so mostly of white men), that the risk of neurological diseases was 42% higher in the year after a (pre-Omicron) COVID-19 infection than for people who had not had COVID-19, even in people who had not been hospitalized.

This paper from Canada found that patients with COVID-19 had higher detectable antinuclear/extractable-nuclear antibodies (ANAs) — antibodies to specific proteins which are part of the nucleus. Higher ANAs correlated with more fatigue and shortness of breath. They also found proteins (tumour necrosis factor alpha and C-reactive protein) which correlated with symptoms; this is interesting because I believe those are easy to measure.

BA.2.75, which has been circulating in India for a while (and which looks nasty in the lab) but which has not seen explosive growth elsewhere, has finally reached a noticeable amount in the USA.

I’m seeing mutterings from People In The Know about a bunch of variants which are popping up with the same mutations, as if those mutations confer some really useful (to the virus) advantage(s). For example, from this Tweet:

This paper says that a BA.2 infection gives good antibodies against just about every strain, while BA.1 does not. (The BA.1 infection seems to give antibodies to the receptor binding domain RBD, which changes frequently, while the BA.2 infections seem to give antibodies to the non-terminal domain (NTD) which does not change as much.) This suggests that BA.5 boosters are better than BA.1 boosters. (Note, however, that usually vaccines generally give induce responses than infections, so this does not mean that you should not get a BA.1 booster. I’ve also read that BA.2.75.2 evades the exact antibodies which this paper discusses.)

This paper says they have found a peptide (small protein) which gums up the mechanism which lets SARS-CoV-2 get into cells (in all variants!). While this is good and promising, this is an extremely theoretical treatment — they haven’t even tried it in mice yet! There’s only a very small percentage of drugs which look good and yet work in mice, and an even smaller percentage which works in humans. So don’t get your hopes up just yet.

This paper says that SARS-CoV-2 produces a specific protein (ORF7a) which then inhibits the MHC 1 molecules, which have the job of showing the immune system pieces of virus which the immune system should make antibodies for. (“Look! Here’s a piece of the bad guys! Watch out for these!”) That makes the immune system less able to repulse the virus.

This paper says that the APOE2 and APOE4 — alleles (variants) of the APOE gene which are less common than the APOE3 allele — correlate with worse COVID-19 outcomes in both mice and humans. Interestingly, those alleles also correlate with Alzheimer’s, atherosclerosis, and anti-tumour immunity.

This paper describes a coronavirus found in a bat in Russia. It can infect human ACE2 receptors and is resistant to the vaccines we have now. Uh-oh. Time to get working harder on a pan-coronavirus vaccine!

This study from multiple countries found that people’s perception of time was affected by how isolated people felt, but not by the stringency of mitigation measures or their mobility.

This article says that demand for parking lots is still way down from pre-pandemic levels.

This pamphlet from the World Health Organization gives advice on how to rehab/recover from COVID-19.